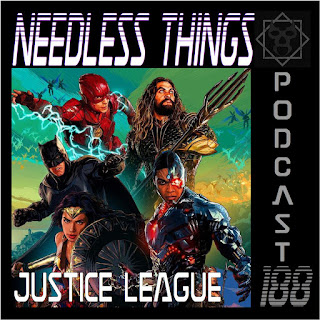 The Needless Things Irregulars gather in the Phantom Zone to discuss the newest entry into the DC Comics movieverse, Justice League!

Starting with Man of Steel in 2013, Warner Bros. has been trying to ape the success of the Marvel Cinematic Universe. Despite having an available roster of arguably the best-known superheroes, the films have struggled to find acceptance, much less the acclaim of the MCU.

After a major course correction with this year’s Wonder Woman, WB has been attempting to right the ship with a lighter overall tone and more fan-pleasing interpretations of the characters. Leaving behind the darker, more grounded influence of Christopher Nolan’s Dark Knight trilogy, the marketing of this newest film has been promising more action and high adventure, as well as some much-needed levity.

Listen in as Dave and the rest of the Irregulars discuss the highs and lows of Justice League in the newest episode of the Needless Things Podcast!